The natural and climatic features of northeastern Bulgaria, which includes the territory of the municipality. Samuel has been favorable to the emergence of life and the development of human activity since ancient times. The abundance of springs and rivers, the pristine forests of a wide variety of wildlife and plants that offered food and shelter attracted the ancient man to the lands here.
The preserved 11 mounds in the present territory of the municipality of Samuel give us evidence of this. They are the first settlements. Specialists date them to the Stone-Copper Age / IV-II millennium BC /.

Life from the 5th to the 5th century BC later on the territory of the municipality is strongly influenced by the presence of a residence center of the Gethish rulers in the archeological and cultural complex “Sborianovo”. From direct and indirect data we can claim that from this and later period there were about 20 ancient settlements and about 60 tombstones, one of which is
excavated in the territory of the village of Golyam izvor and dated to the period IV-III BC. After the conquest of these lands, Abritus (Razgrad) was built by the Romans, which had an impact on life in the region. The influence of the old center in Sborianovo continues.

The Roman presence is noticeable through coin finds, remains of fortified settlements and towers in the lands of the villages of Golyam Izvor, Samuel, Hursovo, as well as Roman roads. The main road Ruse / Sexaginta Prista / -Razgrad / Abritus / -Devnia / Martianapol / -Varna / Odessos / passed near the territory of the municipality of Samuel, through which there were dirt roads.
The arrival of the Proto-Bulgarians marked the beginning of the Bulgarian state, whose capital Pliska, and then Preslav, are located close to the territory of the municipality. Like lands close to the capital, they were probably owned by boyars close to the khan. An indirect testimony to this is the legend of the blindness of Tsar Simeon’s brother – Vladimir Rasate, who was imprisoned in the village of Vladimirovtsi. On the two important roads leading to Pliska, there were fortresses in Vladimirovtsi and Huma during the 9th and 10th centuries to guard the approaches to the capital.
The lands here have been under Ottoman rule since
1388 The participation in Sheik Bedredin’s uprising of 1416-1418 by people from northeastern Bulgaria testifies to the early colonization of the region. The presence of a tekke and two turbets – in Tsurkvino and Pchelina is another fact of the increased interest of Muslim missionaries in these parts. According to the legend, Demir Baba / Iron Father / is a native of the village of Pchelina, and in the area of ​​the village of Samuel preached another saint – Musa Baba. In the lands of the villages of Golyam izvor, Hursovo and Bogdantsi there existed the waqf of the great vizier Rustem Pasha.
During these centuries, buffalo and oxen wagons transported goods to the larger centers – Ruse, Targovishte, Silistra and Varna on the roads in the municipality, often expected by gangs of robbers. Construction of railway Rousse-Varna in 1867. makes it an important raw material export point from the Samuel / Ishiklar station, which is why many warehouses are being built, a Popular Bank, a Grain Exchange and more are being created.
After the Liberation, in the last decades of the nineteenth and early twentieth centuries. the mass settlement of Bulgarians from different parts of the country began, community centers, schools were built, cooperatives were established and more.
After September 9, 1944, a new economic development began, the urbanization of the settlements continued, the railway was constructed. Samuel-Silistra and others.
The modern disposal system was established on December 22, 1978 by Decree No. 2295, which includes 14 settlements within the municipality.

The municipality of Samuil is located in the southern part of the Ludogorie region in the northeastern part of the Republic of Bulgaria, on an area of ​​250 133 sq. Km. Of the Samui Hills. Part of the first railway passes through its territory. Ruse-Varna line with a branch to Silistra.

The terrain is diverse – in some places plain, in others with a predominantly hilly nature. Does not prevent the invasion of air masses. The plain nature of the relief is a prerequisite for intensive agriculture, construction of a quality communication network and other facilities for the settlements. According to the climatic zoning of the Republic of Bulgaria, the Municipality of Samuel falls within the scope of the Ludogorsko-Dobrudzha sub-region.
The climate is temperate continental and has all the typical characteristics. The average daily air temperature is 10-12 ° C. The average monthly maximum temperature is in July (26.2 ° C) and the average minimum temperature is January (-5.8 ° C). The absolute maximum temperature is 37 ° C and the absolute minimum -25.8 ° C. The average annual rainfall is 67.4 mm / m2. The maximum precipitation is in the spring-summer and autumn periods. The wind speed from an agro-climatic point of view is especially valuable the period with average daytime temperatures from 15.04 – 15.10. The duration of the heating period is 180-200 days. In the southern parts of the area where the Samuel Heights rise, the wind pattern is different from the northern ones. In the south, the prevailing winds are northeast.

Industry
One of the industrial
enterprises with the largest
capacity is “Traction” AD –
Wagon repair plant in which
are covered around 250-300
worker. In the municipal center
there is also one enterprise
for the processing of vegetable oil
– Oktopod Oil Painting Plant Ltd.,
where subsistence is found around
80-90 people.In different
settlements there are private companies and agricultural cooperatives mainly in
trade, mill, dairy and
oil industry.
Agriculture
Significant land resources available, accounting for 77% of
the general territory of the municipality and favorable soil and climatic conditions
conditions make agriculture a major source of income.
Arable land in the municipality in 2005 is 146,144 decares. Average of
per capita falls at 16.72 decares, which exceeds the average
size for the country.
Approximately 54% of the area in the municipality is sown with cereals
crops – wheat, barley, maize, such as wheat and
barley are above the national average. They also occupy a significant place
areas with sunflower – 24%. In recent years, apparently
also draws more attention to crops such as lavender,
coliander, rapeseed and more.
Livestock breeding
Changing the structure of arable land will allow
to improve the feed base in the area of ​​the municipality and from there
field for holding the livestock of animals.
The trend over the years is a gradual decrease in the number of
farmed animals. A large part of them are looked after
meeting one’s own needs.
None built
modern
specialized farms for
raising of
animals.General
metrics in
livestock breeding through
recent years have
significant deviations.,
the trend is in
reducing them
number. Breeding cows and sheep for dairy is a no-brainer
for this industry. There are also established traditions that would help
faster integration of the population into the new environmental ones
requirements for the production of milk, meat and eggs.
The reference shows that the livestock of the main species of animals
is a decreasing trend. The causes are mainly in the extremely low
purchase prices. 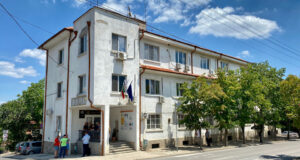