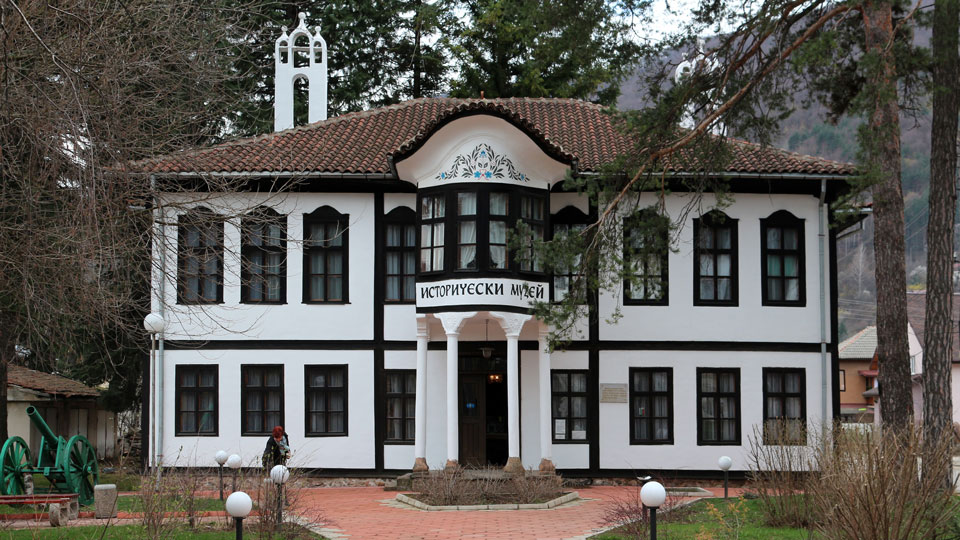 Etropole is a town in Sofia Province, western Bulgaria, nestled in the northern slopes of the Balkan mountains. It lies 80 kilometers (50 miles) northeast of the capital city.

Proximity to mountain passes connecting northern Bulgaria to points south and west and abundant local mineral deposits have made the Etropole region an attractive place to settle since prehistoric times.

Etropole has been variously a mining and timber center, crafts center, educational center and a spiritual center during its long and celebrated history.

The earliest evidence of habitation at Etropole are stone axes and ax hammers dating from the Bronze Era, about 3000-2000 BCE.

During the first millenium BCE, the Tripal Thracian tribe settled in a broad area on both sides of the western Balkan mountains. Etropole was established as a settlement by 700-600 BCE, and, owing to its favorable location near ancient roads connecting the Danube River to Macedonia and Thrace, became a prosperous economic center. Artifacts including high quality vessels, coins and jewelry testify to the success of the town in ancient times.

The Macedonian forces of Philip II and Alexander the Great engaged the region in their battles against the Thracians. Later military forces of Roman, Celtic, Byzantine and Bulgarian origin also passed through.

Etropole became part of the First Bulgarian Empire in the late 7th century CE. During the middle ages it was the major Bulgarian source of metal resources. Later it became one of the major sources of iron for the Ottoman Empire.

Economic prosperity led to the development of education in the town. The Holy Trinity Monastery became a center of literary development, producing a unique style of calligraphy and illustrated religious books. Seventy six preserved volumes represent a precious treasure of Bulgarian literary history. The monastery school was established in 1613.

During the Bulgarian National Revival the town became a craft center, producing pottery, gold, copper, clothing, carpets, and more. Goods from Etropole were traded as far afield as Vienna, Budapest, Odessa and Egypt.

Vasil Levski established a secret revolutionary committee in Etropole in the autumn of 1870. Men of the town went on to serve with many of the great Bulgarian revolutionaries, including Hadzhi Dimitar, Stefan Karadzha, Panayot Hitov and Georgi Rakovski. Five fought together with Hristo Botev.

The town played an important role during the Russo-Turkish War. It was freed by Russian troops on 24 November 1877 and became the headquarters from which General Joseph Gurko commanded the Russian crossing of the Balkan mountains.

The development of north-south roads bypassing the town led to its eventual decline as a center of influence, yet it remains a town with well preserved historical and cultural assets worth exploring.

Etropole is located on the northern slopes of the Balkan mountains, in the valley of the Mala Iskar river, at an elevation of 618 meters (2028 feet). It is located close to two important passes through the Balkan mountains. The Etropolski Pass connects northern Bulgaria to Sofia and Macedonia. The Zlatishki Pass connects it to Thrace and the Aegean Sea.

The region above Etropole is rich in iron, copper, gold and silver ores. The Elatsite open pit copper mine is the largest mine on the Balkan peninsula and one of the largest mines in Europe.

The mining works at Elatsite dominate the local economy, providing the livelihood of over 2000 families in the region.

Etropole History Museum Ten halls display historical artifacts and exhibits about the town and its people.

Etropole Clock Tower Build as a defensive tower in 1710. Converted into a clock tower in 1821.

Holy Trinity Monastery Founded in the 12th century. Center of education and home to a a famous literary school. Included under number 63 on the list of 100 tourist sites of Bulgaria.

Zoliovska Cheshma Legend says that if you drink from this fountain you will stay in Etropole forever.

Eagle Rock and the Red Wall