A word cloud of the speech by Ms Tsetska Tsacheva, President of the Bulgarian National Assembly, on the occasion of the 126th anniversary of the Unification of Bulgaria. Delivered in Plovdiv on 6 September 2011. Full text follows below. 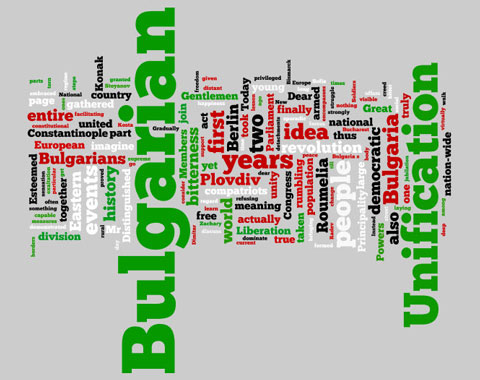 We have gathered here to mark one of the most significant events of our modern history.
The Unification!
Today it is hard to imagine the nation-wide jubilation on that distant day 126 years ago. To us united Bulgaria is something taken for granted and we cannot picture the country divided into two. We cannot imagine, that starting from Tarnovo or Sofia to Plovdiv people were actually heading for another country…from the Principality of Bulgaria to Eastern Roumelia.

Back at that time, despite the visible economic advancement and the initial steps in building the country’s statehood, the bitterness of division was strongly felt in both parts of Bulgaria.

For as we all know, yet before the exaltation of the Liberation had expired, the Bulgarians encountered the imperatives of the world at large they wanted to join. At the Berlin Congress the Bulgarian national ideals had to submit to the European interests. “Gentlemen, we have not gathered here to discuss the happiness of the Bulgarians, but to secure peace in Europe”, went straightforward Bismarck. At the Berlin Congress, yet before being established, the New Bulgarian State had to learn its first lesson: the world is large and there nothing is given for free.

The bitterness of division would dominate the two Bulgarias during the first years after the Liberation. Those who had long and tenaciously worked and staked their all on the Bulgarian creed – during the Constantinople struggle for ecclesiastical independence, the Bucharest committees and the Bulgarian uprisings, could not put up with that bitter feeling. The entire Bulgarian people shared the sensation of a body torn into two.

Stronger is the bitterness in Eastern Roumelia, which is nominally under the rule of Constantinople, though Simeon Radev would remark in this regard: “Instead of the vilayet of privileged standing devised by the Berlin diplomacy, a virtually free state was formed with a constitutional regime and Bulgarian national individuality”.

In the beginning of 1885 the hollow rumbling of the forthcoming change started to be heard in this very Eastern Roumelia. When reading the history books on those years we notice how the idea of unification gradually encompasses the entire people. This idea did not belong to a single center. Of course there was a Revolutionary Committee. But the idea was also embraced by politicians, young Bulgarian military, intellectuals. There wasn’t any particular coordination among them. There were attempts to sound the positions of the Great Powers along with the passionate articles of Zachary Stoyanov and sporadic street demonstrations. Gradually the rumbling would get stronger to finally spill out into a true democratic revolution.

Because, dear compatriots, the Unification is indeed a genuine democratic revolution. Everyone would join it. The rebels of Dimitar Rizov and Kosta Panitsa, the armed forces under the command of Danail Nikolaev, the rural detachments like the one of Chardafon and the entire population of Plovdiv which took the streets and surrounded the Konak. Actually, the resident of the Konak took part himself by refusing to resort to extreme measures on the eve of the events, thus facilitating the revolutionary actions.
Ladies and Gentlemen, part of this democratic revolution were also the leaders and the population of the Principality as well as the first Bulgarian Prince, who gave his silent support both before the events and by recognizing their outcome.

Thus the Unification proved a nation-wide and all- Bulgarian act.

The meaning of the Unification does not lie in the abolishment of borders between the two states. Its true meaning is in the act of bringing together and uniting the Bulgarian people.

When a few months later the Unification is subject to armed threats, the Bulgarian people would show the world what it is capable of when undivided, when truly united. It actually imposes it will on the Great Powers thus laying the foundations of Bulgaria’s remarkable progress over the next 25 years.

Today the Unification is only a page of our history. We often go again through that page without truly realizing to what extent it has defined the generations not only after the events, but also ourselves. Democraticism, first demonstrated in the years of the Bulgarian National Revival, was reiterated by the Unification as an important feature of the Bulgarian character. Love for freedom and self-confidence are characteristics that we do not always manifest, however cherish deep in ourselves as substantiated by the Unification.

And finally, the Unification offers us the concept of unity. It seems to me that we have to seriously consider this idea in times as difficult as the current ones. For unity is not only a word. Neither does it preclude diversity, inherent to democracy. Unity does not only mean unanimity on the road we have taken. It is that supreme confidence that we can walk that path till its very end together – all professions, social strata, ethnic groups, young and old.

Japan and the EU: Valuable Partnership for the Future