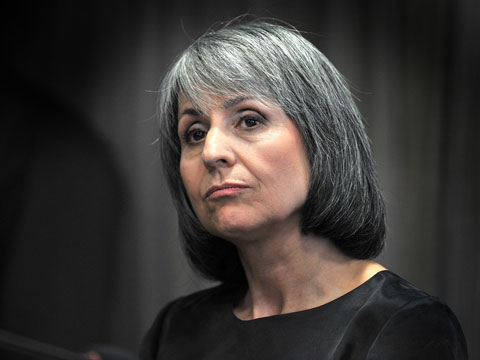 Margarita Popova, 55, was born on 15 May 1956 in Velingrad. In 1975 she graduated from the German Language High School in Pazardzhik. In 1980 Popova graduated from Sofia University with a degree in Bulgarian philology and a minor in German, then in 1989 completed a degree in Law from the same institution.

Popova started her legal career as a Junior Prosecutor n Pirdop from 1990-91, then served as Regional Prosecutor in Svoge from 1991-93. In 1993 she moved to Sofia, where she held various positions, eventually rising to Administrative Head in the District Prosecutor’s Office.

In 2006 she became a Prosecutor at the Supreme Prosecutor’s Office of Cassation. Her work there included heading up a unit working to counteract financial crimes against the EU.

In July 2007 she was named Justice Minister in the cabinet of newly elected Prime Minister Boyko Borisov. As Minister she has championed the cause of judicial reform.

In October 2011 Popova was elected Vice President on the winning ticket of Rosen Plevneliev and GERB. She takes up her new office in January 2012.