The first excerpt discusses English policy concerning the Eastern Question, illustrating the complicated relationship between foreign affairs and the feelings of the population at home.

The second is a brief notice of home affairs which gives voice to the concern of the people and acknowledges public gratitude towards William Gladstone.

From Topics of the Week:

ENGLISH POLICY IN THE EAST.—- The speeches of Ministers and the papers which have been laid before Parliament leave no room for doubt as to the course the Government have pursued during the recess, and the course they intend to pursue in the immediate future. All the evidence goes to show that they have sympathised as warmly as Mr. Gladstone himself with the oppressed subjects of the Porte, and have been thoroughly sincere in their efforts to secure the reform of Turkish methods of government. The instructions with which Lord Salisbury started for Constantinople could not have been more precise or firm; and although he was not authorized to threaten the use of force, he had full liberty to take every step short of that extreme measure. Above all, he was to give the Sultan clearly to understand that if our counsels were not adopted we should in no case intervene to save Turkey from ruin. It is difficult to imagine in what respect those who have been bitterly denouncing Lord Beaconsfield and Lord Derby for indifference to the wrongs of the victims of Ottoman tyranny could have given more emphatic proof of sympathy with the general feeling of the nation on the subject. With regard to the future, it seems probable that an attempt will be made to force the Ministry to side with Russia in compelling the Porte to carry out the proposals of the Conference. Even Lord Hartington, in his cautious speech, expressed the opinion that it would be safer not to let Russia act alone; and Lord Granville set forth the same view. Both statesmen, however, evidently believe that if we were to form the strange alliance for which they plead we should not really have to draw the sword, since turkey would inevitably yield rather than meet two such Powers. But this is by no means certain. In a moment of despair, and greatly overrating his own strength, the Turk might defy both England and Russia; so that before having recourse to threats of war we are bound to decide whether, in case of need, we are prepared to give effect to them. There are many signs that the majority of the English people would greatly prefer in the mean time simply to do nothing. In the first place, they do not like the idea of associating in a vast enterprise with a Power which they distrust, and which is capable of stealing a march upon them when they least expect it. Besides, they fear, not without reason, that if we were to fight Turkey we should cause fresh horrors of the kind with which the Bulgarians are already too familiar; and since the Porte has made large promises, and has the most powerful motives for fulfilling them, they think it only fair that the new régime should at least receive a trial. There can be little question, therefore, that Prince Gortschakoff will find no encouragement for his aggressive policy in the reply he will receive from this country. We shall not support the Sultan against the Czar, but we are not at all more inclined to support the Czar against the Sultan; and if the two come into conflict it will be our aim to let them fight out their quarrel by themselves, only taking care that our own interests are not injuriously affected by the conflict

From the Home column:

There has been little doing outside the walls of St. Stephen’s. It is said that Earl Granvillle and Lord Hartington have now definitively resolved to move resolutions in both Houses on the Eastern Question, urging the Government to act in concert with the other Powers, chiefly Russia, in insisting upon the adoption by the Porte of the recommendations made during the Conference. – At a meeting held in Liverpool on Monday, to raise further funds for the distressed in the East, Mr. H. Duckworth, a local Conservative, said the country was under an unspeakable debt of gratitude to Mr. Gladstone, whose conduct was both Christian and philanthropic. If it had not been for him Lord Salisbury would never have been sent to Constantinople. 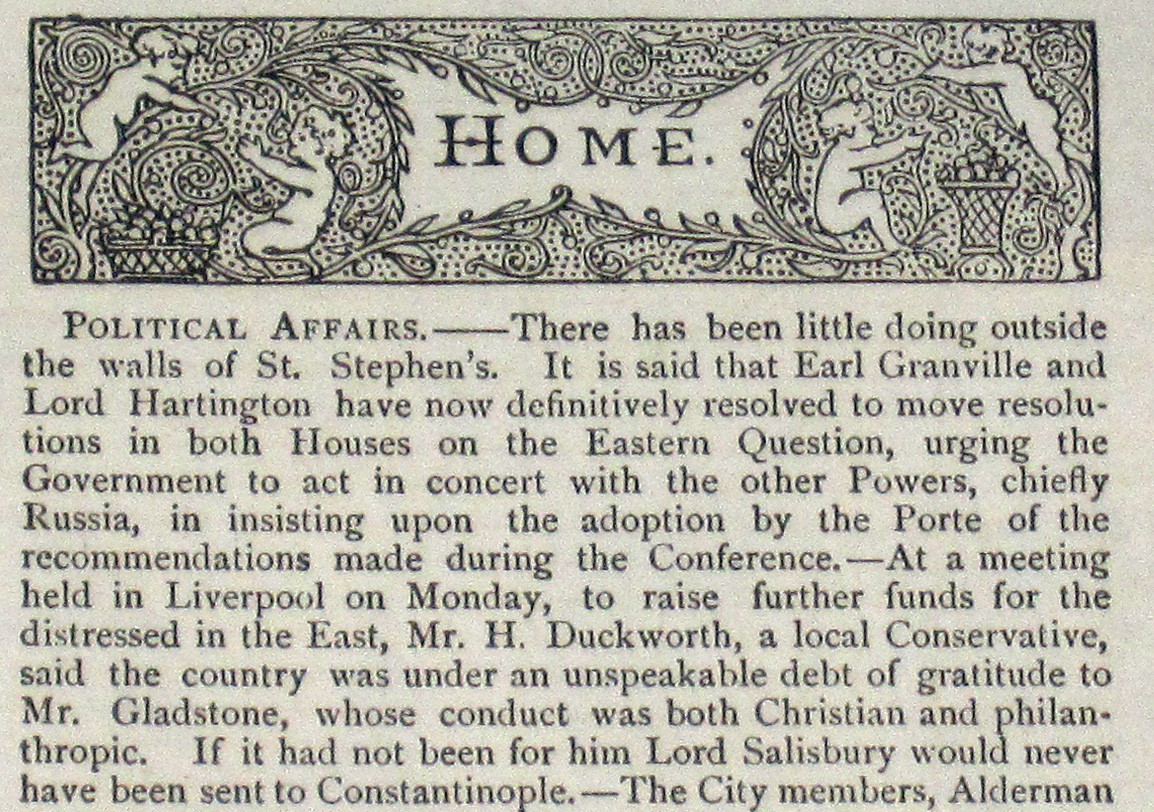