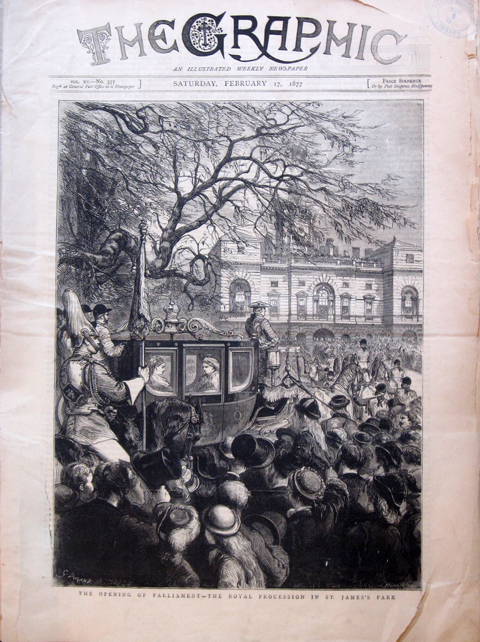 An article from The Graphic, a British illustrated weekly, issue dated February 17, 1877.

The Eastern Question. – There is little actual news, and Europe is once more waiting for some decided step on the part of Russia and Turkey. None of the Powers have yet given any official answer to Prince Gortchakoff’s Note, and it is not unlikely that the Note may long remain unanswered from the fact that no Power wishes to commit itself to any line of action by answering the Russian Premier’s direct question as to the policy each State intends to adopt. The chief themes of discussion have been the Queen’s Speech, which has been everywhere favourably commented on, the publication of the “Blue Books,” and Lord Derby’s hint of separate action on the part of Russia and Austria. This last, taken together with General Igantieft’s (sic) short cut to St. Petersburg viá Vienna, and the fact that he and Count Zichy embraced each other on his departure from the Austrian capital, has furnished ample food for discussion. So indeed has a speech of Prince Bismarck, at a Parliamentary dinner, in which he praised Midhat and Edhem Pasha, but thought that war was not unlikely, though in the undertaking Russia would not have the “material support” of Germany. He is also said to have made the surprising statement that Russia wished to be subsidised by the other European Powers, while he also intimated that Midhat Pasha’s disgrace, though mainly due to personal reasons of the Sultan, was not wholly free from foreign influence. This last utterance is somewhat corroborated by a remark of General Ignatieff that “matters would soon be changed in Turkey,” and by the fact that the Golos forty-eight hours before Midhat’s dismissal published a letter stating that the Grand Vizier was absolutely doomed. The Golos has since been energetically prophesying the speedy fall of the Turkish empire, not by any active interference on the part of Russia, “which might stay the decomposition of the corpse,” but by her own hands, as “no foreign enemy could destroy Turkey with the rapidity she employs in destroying herself.” The Golos accordingly recommends a waiting game, but with a Russian army on the Turkish frontier, so that when the sick man does die anarchy may be prevented, and Russia’s co-religionists not be buried beneath the crumbling ruins – in other words, that Russia may secure her share of the spoils.

As for Turkey herself, it is pretty clear now that Midhat Pasha had never taken part in any plot, but had both offended and frightened the Sultan, first by declining to visit the Palace unless specially ordered, and secondly by his independent action, for, he himself declared, that as he had organised the Constitution, he considered himself the man best fitted to carry it into effect. The Sultan, alarmed at this independent spirit, willingly listened to the representations of Midhat’s enemies, and exiled him to Brindisi, presenting him, not after the old fashion, with a silken bowstring, but with a check for 500l. for his traveling expenses. Both the Sultan and Edhem Pasha are taking great pains to impress Europe that the change will make no difference in carrying the proposed reforms into effect, and that the Government is now and ever will be conducted on the basis of the new Constitution. The peace negotiations with Servia and Montenegro are continuing, and with the former State very satisfactory progress has been made, Prince Milan having despatched Senator Philip Christics to Constantinople to conclude matters. The points respecting the Turkish flag and the suppression of revolutionary bands and secret societies have been conceded by Servia, while Turkey has given up her demand that the Jews should be placed on the same footing as the Christians, as Servia considered this a question affecting her autonomy. The proposed diplomatic “Commissioner” also will be softened down into a Consul-General or “diplomatic agent” who will reside at Belgrade. The Great Skuptschina, numbering four times as many members as the ordinary Parliament, has been convoked for the 26th inst. to ratify any arrangements which may have been made. With Montenegro matters are also proceeding favourably, though not so quickly, for Prince Nicholas desires to negotiate on the status quo ante bellum, plus certain additions to his territory which the Turks are not unlikely to concede under the head of frontier rectifications.

Safvet Pasha, the Minister for Foreign Affairs, and one of the delegates at the Conference, has issued a circular dispatch to the Powers, recounting from the Turkish point of view the proceedings of the Conference, and calling attention to the closing speech of General Ignatieff, whose comminatory utterances he declares were received by all the delegates in silence, wherein he perceived an “unequivocal sign of astonishment at the General’s language.” – Midhat Pasha is now at Brindisi, and is expected to go to Rome. – Constantinople is perfectly quiet, though its residents are suffering from a stagnation of business, and it is said that the merchants in the bazaars are willing to sell off their goods at any price.

Related topics from this issue of the Graphic:

Relieving the Distress in Bulgaria