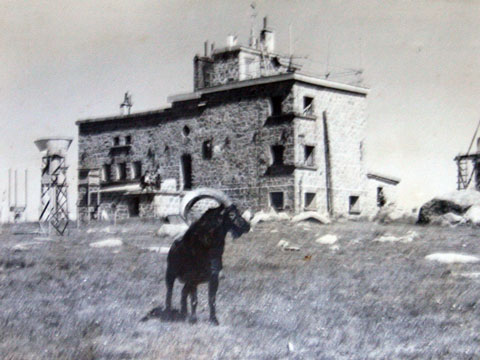 This undated photo shows the Aleko Shelter meteorological observatory perched on Cherni Vrah (EN: Black Peak), the highest peak of Mount Vitosha.  The Aleko Konstantinov memorial plaque on the building, placed there in 1959, narrows the range of when it might have been taken.

The idea for an alpine meteorological observatory on Cherni Vrah was first proposed by the German meteorologist K. Kasner in 1905.  Discussion of the idea continued in publications of the Bulgarian Tourist Union, and in 1927 a group within the Sofia chapter of the tourist union undertook a fundraising drive to realize the project.  Members of the Cherni Vrah committee were representatives of the Central Meteorological Institute, the  Sofia “Aleko Konstantinov” Chapter of the Bulgarian Tourism Union, the Sofia Municipality, and the Pernik Mines Cоrporation.

The observatory was built in the summer of 1935 and dedicated on 27 October that same year.  From then on the observatory has collected important meteorological data for over 75 years.  Its position at the center of the Balkan Peninsula makes it a valuable reference point for measuring weather patterns and details for the region.

Here is how it looks today: 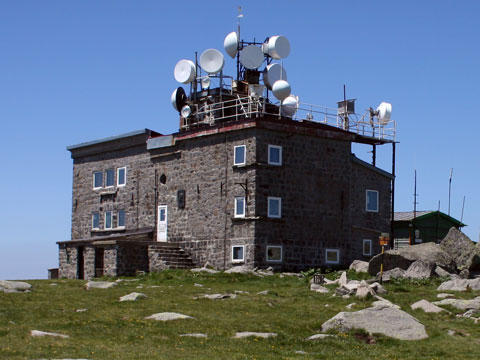 The dishes, antennae and other electronic paraphernalia illustrates how the original instrumentation has given way to more modern, sophisticated equipment, but the building itself is mostly unchanged.  New windows make the facility more comfortable for year round use.  The Cherni Vrah station of the Bulgarian Mountain Rescue Service can be seen peeking out from the rear of the observatory.