On Okolchitsa Peak (BG: Околчица), high above the Vratsa plain, stands a solitary cross in memory of the freedom fighter and Bulgarian national hero Hristo Botev, who met his end near this spot on 1 June 1876.  It also celebrates members of his detachment who fought and mostly died alongside him. Thirty five meters tall, the monument is visible from miles away and acts as a beacon for pilgrims from all over the country who come here to remember the great fighters who died for their country.

Okolchitsa Peak is number 17 on the Bulgarian Tourist Union list of the top 100 tourist sites.

In one of the most remembered episodes of the long struggle for Bulgarian freedom, Botev led his detachment of 205 men across the Danube to participate in а hoped for rebellion against the Turks.  On 30 May they engaged the enemy in the Battle of Milin Kamak, where they lost 30 men.  Withdrawing under cover of night, they spent he following day resting in a quiet valley, protected by the watchful eyes of local farmers and shepherds.

Early on the morning of 1 June they withdrew towards the Vratsa Balkan, surprising the enemy at Leskov Dol. They continued on over the saddle of Vola Peak to Tsareva meadow, establishing his headquarters position on Kamarata Peak with a second force on Kupena Peak. The fighting began at about 10:00, and continued almost without interruption throughout the day. Enemy infantry,supported by cannons, fired incessantly on the rebels, ultimately driving them off the peaks, but the detachment was not broken. By afternoon, they had spread out south of Okolchitsa Peak, and, having sounded the all clear, the detachment descended the slope to get water from a spring.

In the final chapter of his story, Botev and some of his staff stopped to discuss their situation in a small gully on the southeastern slope of Kamarata Peak. Standing to see where the rest of the detachment was, a single shot struck Botev in the chest, piercing his heart, and he fell down dead. His companions removed his decorations, hid the body, and left it there as they made their escape. Following the death of their leader the detachment scattered. Over 130 had been killed, and eventually almost all were captured and executed.

Raising a Monument on Okolchitsa

The first monument was erected on Okolchitsa in 1901, marking the 25th anniversary of the battle. The organizing committee included nine surviving members of Botev’s detachment. The dedication states that Okolchitsa was chosen as “a visible, personal and accessible location close to the place of the historical events.” The cross was erected by popular demand in 1937-1938. In 1947 a red star was added to the monument to give it the appropriate communist air. The star was removed in 1991.

The Deathplace of Hristo Botev

A short 2 kilometer trail to the death place of Hristo Botev is signposted on the road just below the peak. The spot is marked by simple stone bearing a short engraving: “To the great Botev. Your prophecy has been fulfilled – you are alive! 20 May 1876.” (BG: “На великия Ботев. Изпълни се пророчеството твое – жив си ти! 20 май 1876 г.”) The date is according to the old Julian calendar, which by modern reckoning is 2 June.

In recent years Okolchitsa has become a place of pilgrimage for patriotic Bulgarians. Each year many of the most faithful travel the path of Botev’s detachment from Kozloduy to Okolchitsa, arriving in time for the national remembrance celebration that takes place at Okolchitsa on 2 June.

The Bulgarian Tourist Union operates a mountain hut 300 meters from the peak. 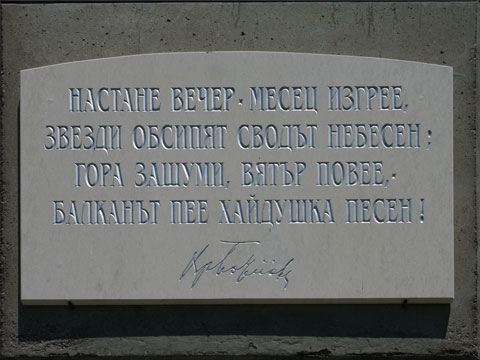 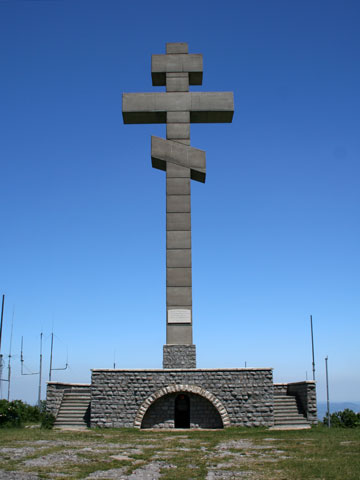 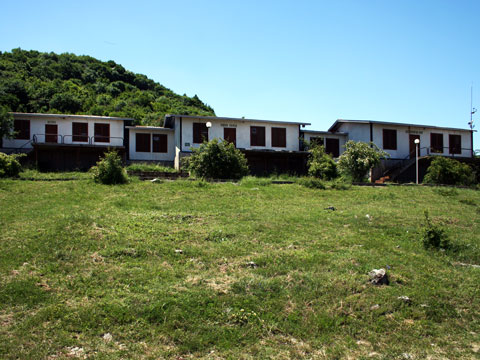 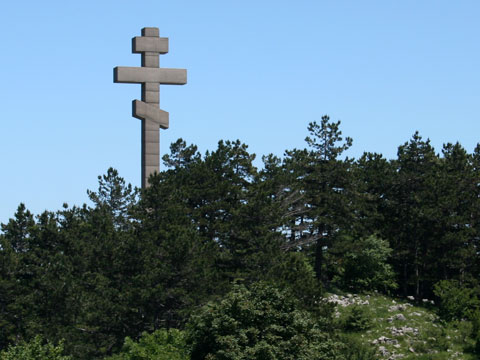 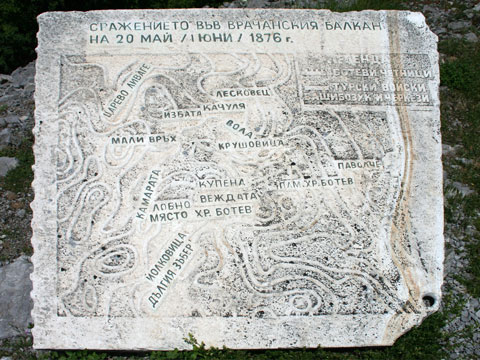 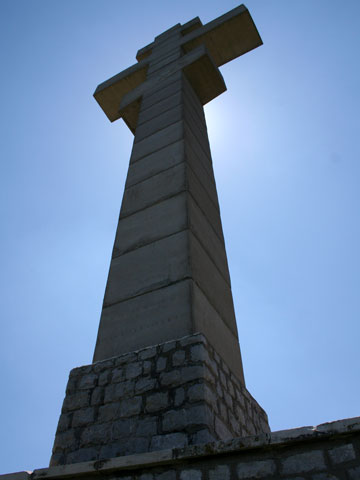 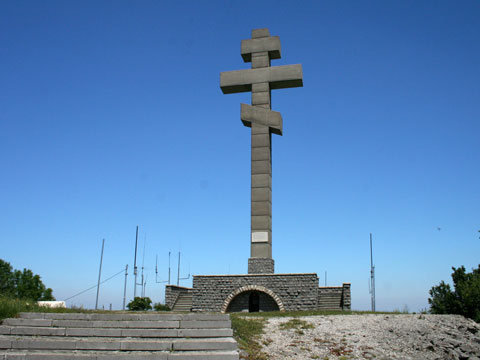 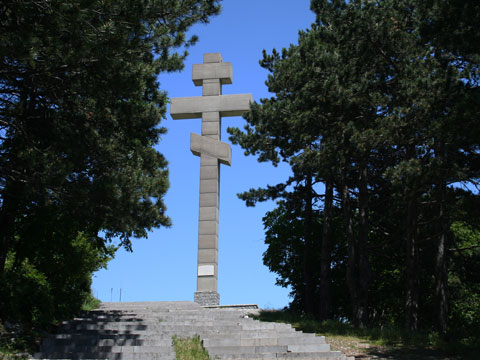 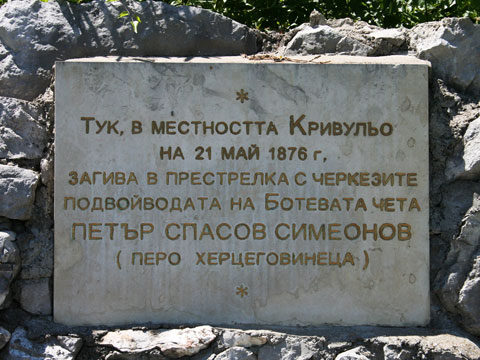 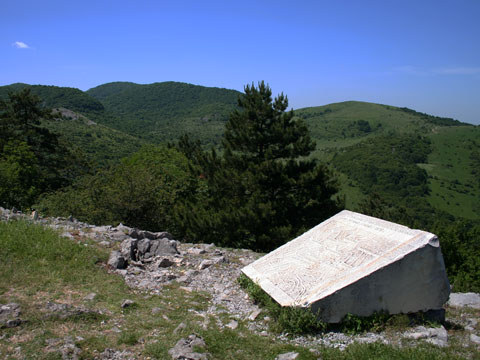 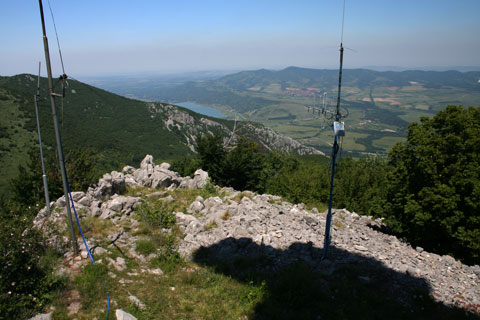 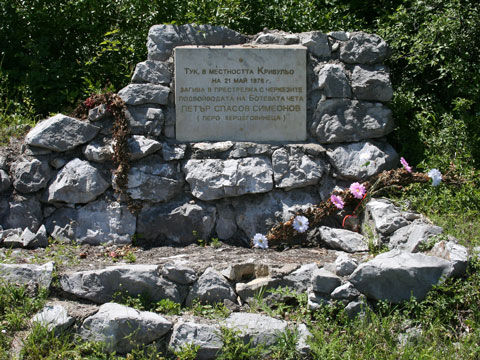 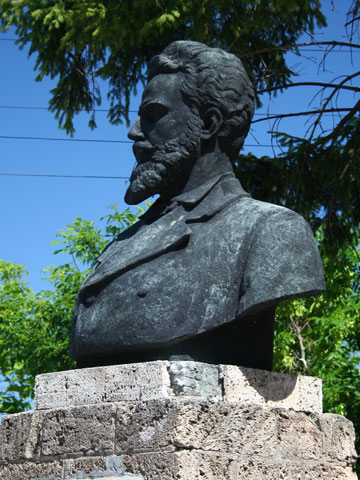 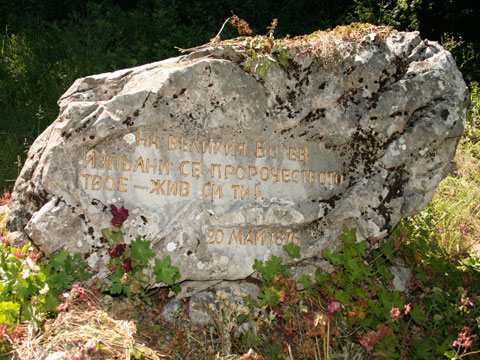 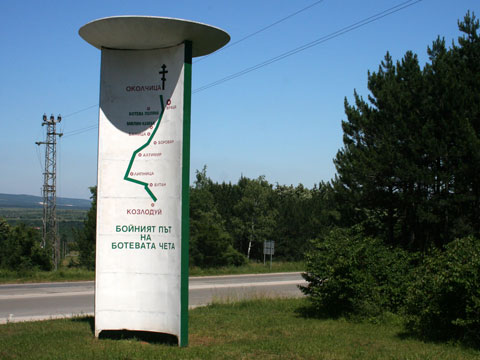 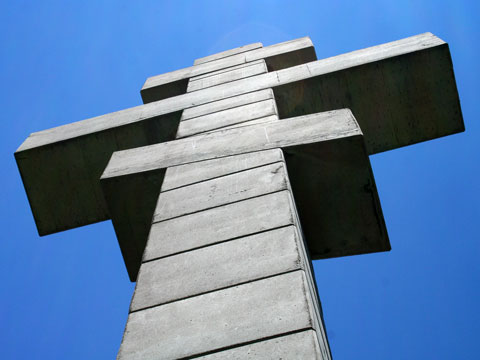