Dobri Pavlov Dobrev was born on 3 August 1927 in the town of Gorno Sahrane, near Kazanlak.

He completed primary school in his home town, then middle school in Dolno Sahrane, the town next door. Dobrev graduated from High School in Kazanlak, and it was there that he first dreamed of becoming an artist.

During high school Dobrev hung out in a circle of artists including the well known humorist and artist Chudomir. In the autumn of 1945 he left for Sofia, where he enrolled in Sofia University.

After completing two years studying Slavic Philology, Dobrev was accepted into the Art Academy in Sofia.  There he studied under Professors Tsenio Todorov, Kiril Tsonev, Iliya Beshkov and Dechko Uzunov. He graduated in 1954. For his diploma project he created The Defense of Perushtitsa, depicting the tragic events that took place in Perushtitsa on the last day of the April Uprising inside the Church of the  Holy Archangel Michael.

The Art and Career of Dobri Pavlov Dobrev

As an artist, Dobrev distinguished himself as a technical expert and influential force in the Bulgarian art scene. His works explored a variety of themes. He was particularly adept at portraiture, and worked prolifically in that genre. He was also a master of historical representation, and his finest works depict real historical events. He also painted fine landscapes and other compositions.

He donated his historical painting The Defense of Perushtitsa to the Perushtitsa History Museum for its opening in 1955. It remains the central exhibit and most important piece in the museum’s permanent collection.

Over the course of his career he participated in many group and individual exhibitions.

Professor Dobri Pavlov Dobrev was named an honorary citizen of Perushtitsa on 21 May 1999. He died in Sofia on 2 December 2003. 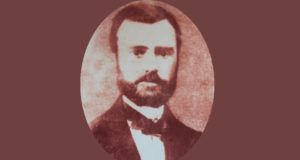