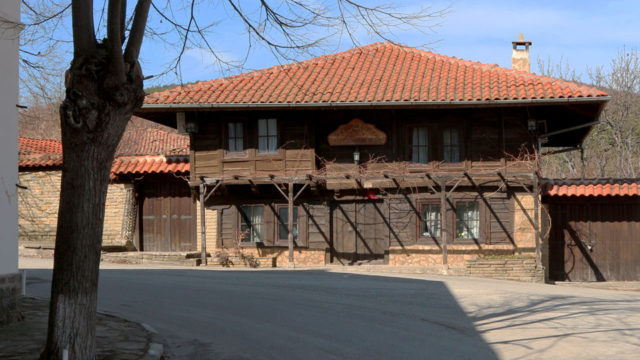 Medven is a village in the eastern Balkan mountains of Bulgaria, located in the Kotel Municipality, Sliven Province. Along with similar villages such as Zheravna, Gradets, and Neykovo. It is famous for its traditional wooden architecture and well preserved 19th century national revival period homes. It is the birthplace of Zahari Stoyanov, a famous writer and chronicler of the Bulgarian War of Liberation (the Russo-Turkish War of 1877-78).

The origins of Medven are unclear, and as often happens in such circumstances, several proposals have been put forth to fill the historical gap. All of them share one feature in common: that migrants came from another village or town and, finding a favorable location, settled there and made it their home.

The early settlers engaged in animal husbandry, mainly shepherding, and the production of homespun crafts. These trades sustained the village throughout its history.

The Ottomans called the town Papazkyoi, which means Priest’s village. Medven also enjoyed the status of a military village, providing contract services to the Ottoman troops.

Until the war of liberation, Bulgarians lived side by side with Turks in the area around Medven. Once the war started, however, ethnic tension increased and relations soured.

On 16 January 1878, around 200 combined Turkish irregulars, Circassian mercenaries, and regular troops attacked unarmed civilians in Medven, killing 58 men, women, and children. During the attack they burned the local church to the ground. Only one icon survived the church fire, fittingly that of Saint Marina, for whom the church was named. It was found among the ruins hidden in a niche.

The attackers also burned about a dozen homes owned by prominent local citizens. Many of the destroyed homes were said to have been among the most beautiful in the village.

Some of the village men, including Mayor Sabi Nikolov, fled the attack rather than defend their homes and neighbors. When they returned, they found themselves unwelcome by their fellow townspeople, and subsequently some moved away.

Medven After the Liberation of Bulgaria

In 1882 Medven established the Izvor (source or spring) Community Center. In the same year they began construction of a new stone church on the same location as the previous wooden church building.

During the early decades of the 20th century Medven built a public high school, opened a health clinic, and undertook modernization of the village infrastructure.

Despite these efforts, the town slowly faded, and most of the population moved away. The population eventually fell below 200. Today there are more homes than there are people, and the village is primarily a museum of past glories.

Zahari Stoyanov (1850-1889, born Dzhendo Stoyanov Dzhedev) was a revolutionary, historian, and writer. He is best known for his great wartime chronicle, Memoirs of the Bulgarian Uprisings. Eyewitness Reports. 1870–1876.

Gospodin Dimov Buchvarov (1835-1897) was a teacher, patriot, and cultural activist.

Stoyan Bachvarov (1878-1949) Actor and director. A pioneer of the Bulgarian National Theater.

View a collection of images from around Medven. We strive for realistic representation of the places we visit and write about on this site.