The 1300 Years of Bulgaria Monument was built in 1981 to commemorate 1300 years since the founding of the first Bulgarian state. It was part of a major nationwide building program to celebrate the event. The monument was hurried to completion in order to meet the required date, and some materials had to be changed from the original plan. In particular the facade was made of smaller tiles than intended, and the joints were not sealed properly. As a result it began to crumble almost immediately and continued to do so for years, becoming an eyesore and an embarrassment right in the heart of Sofia.

The monument was eventually surrounded by a security fence and later covered by scaffolding. The colorful graffiti adorning the security fence is at least something interesting for passersby.

Dealing with the monument is a political hot potato, so don’t look for resolution or renovation any time soon.

What do you think should be done with the 1300 Years of Bulgaria Monument?  Tell us. 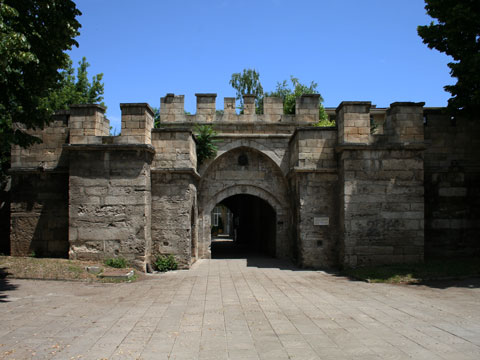