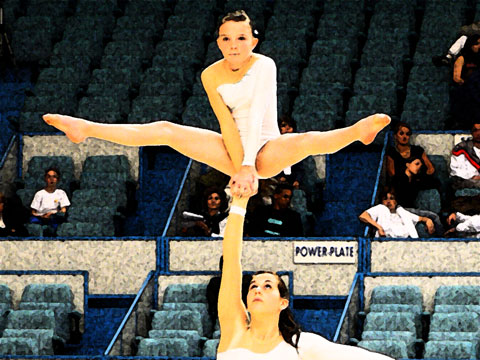 The European Championships in Acrobatic Gymnastics will be held in Varna, Bulgaria, from 24-31 October.

From 20- 24 October the 6th European Age Group Games will take place, followed by the 25th seniors and 9th juniors European Championships in Acrobatic Gymnastics from the 24-31 October.

During these European Championships and European Age Group Games, some 466 gymnasts from 18 national federations will compete in the categories women’s pairs, men’s pairs, mixed pairs, women’s trios and men’s groups.

Of the different winners in 2009 in the senior’s category, the Russian men’s pair, the women’s group and the men’s group (with 3 gymnasts out of 4 who are the same as in 2009) will defend their title.
The field also includes several gymnasts from the 2009 junior category who will compete this year in the seniors’ classification.

The competition is organized by the European Union of Gymnastics (UEG). The UEG includes 48 national member organizations and over ten million gymnasts. It represents a broad selection of gymnastic pursuits, from Olympic level to gymnastics for all, making it one of the most diverse sports federations in Europe.