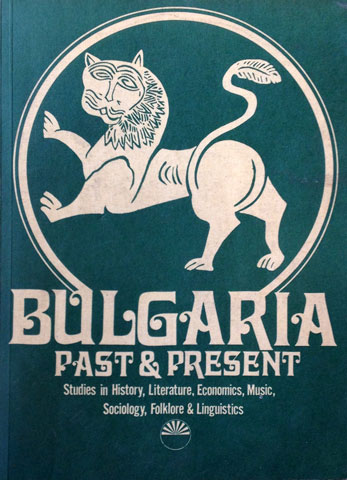 Bulgaria Past & Present is a collection of scholarly essays comprising the Proceedings of the 2nd International Conference on Bulgarian Studies, held in Varna, Bulgaria, from 13-17 June 1978.

The volume includes forty one articles on a wide variety of topics, including history, literature, economics, music, sociology, folklore and linguistics. Some of the topics, such as history and literature, are easily accessible to the curious reader. Others, such as those on linguistic matters, are perhaps only of interest to specialists.

An interesting observation is that many of the Bulgarian authors reflect the communism of the times. Undoubtedly their reports would differ if written today.

The English translations of Bulgarian authors were obviously done by Bulgarian native speakers. As a result they suffer from the typical errors of grammar, syntax, and vocabulary often encountered in Binglish colloquial usage. The volume would have benefited from the addition of at least one native English speaking editor to assist in the scholarly task.

Nevertheless, the collection is useful for anyone interested in the state of Bulgarian studies during the late 1970’s in general or the specific subject matter of the articles in particular.

Welcome to Bulgaria keeps a reference copy of this work in its library for the use of our customers.

Foreword
Hristo Hristov – Russia, the West European States and the Liberation of Bulgaria from Ottoman Rule.
Marin Pundeff – Schuyler and MacGahan before 1876.
Tsonko Genov – Januarius A. MacGahan before 1876.
James F. Clarke – Lt. Greene and the Russo Turkish War.
Liubomir Panaiotov – The Ilinden-Preobrazhenie Uprising in 1903.
Vladimir I. Georgiev – Genesis of the Bulgarian People and the Appearance of the Bulgarian Language.
Zhana Molhova – What Does Componential Analysis Say?
Victor A. Friedman – Admirativity in Bulgarian Compared with Albanian and Turkish.
Svetomir Ivanchev – An Unusual Way of Forming Diminutives from Nouns of Masculine Gender in Bulgarian.
Eric P. Hamp – The Loss of Declension and the Definite.
Liuben Berov – Economic Relations between Bulgaria and the USA during 1918-1941.
Liubomir Dellin – United States Trade with Bulgaria – Problems and Prospects. A Report on American Research.
Raina Pesheva – The Bulgarian Family and the Traditions of National Culture.
Irwin T. Sanders – Studying Bulgarian Village Life in the 1930’s.
Roger Whitaker – Experienceing Revolutionary Change: The Role of Tradition.
Velichko Dobrianov – What is Developed socialism – Theoretical and Practical Advancements.
Philip Shashko – A Bulgarian Revenge: In Search of the Real Yorvaki-Haji Oglou.
Michael B. Petrovich – The Romantic Periodof Bulgarian Historiography: From Paissii to Drinov
Peter John Georgeoff – The Role of Education in the Bulgarian National Revival.
Gencho D. Piriov – Democratic Principles of Bulgarian Education.
Trendafil Krustanov – Origins of the Neo-Bulgarian Enlightenment.
Albert B. Lord – The Structure of Certain Bulgarian Rescue and Return Songs.
Stefana Stoikova – On the Problem of Continuity in Bulgarian epic Tradition.
G. Koolemans Beynen – The Bulgarian Animal Language Tales.
Ante Kadic – The Bulgarian Peasants as Portrayed by Elin Pelin and Iordan Iovkov.
Stefan Elevterov – America through the Eyes of Aleko Konstantinov.
Tsveta Damianova – Western European Romanticism and Bulgarian Renaissance Literature.
Petar Shopov – Linguistic Intercourse as a Basic Prerequisite for the American Missionary Work in Bulgaria.
Veselin Traikov – The First American Protestant Missionaries in Bulgaria.
Voin Bozhinov – On the Political Relations between Bulgaria and the United States of 1918-1923.
Alexandar Velichkov – On Some Aspects of Bulgarian-American Relations Immediately Before and at the Beginning of World War II.
Raina Manafova – Some Aspects of the Bulgarian-American Cultural Ties from the Liberation to the First World War.
Boriana Velcheva – Bulgarian “jers” and the Contribution of American Linguists to Their Study.
Ronelle Alexander – Directions of Morphometric Change in Bulgarian Dialects.
Iordan Penchev – Dative Pronominal Indirect Objects and Attributes in Bulgarian.
Elena Toncheva – Bulgarian Melodies in Byzantine Manuscripts of the 14th and 15th Centuries.
Boris Kremenliev – Multidisciplinary Approaches to Ethnomusicology.
Dimitar Dimitrov – Relations Between the Commmunist Party and the Agrarian Party over the Past 80 Years.
Frederick B. Chary – The Politicization of the Bulgarian Agrarian Popular Union, 1899-1901.
Iono Mitev – Alexandar Stamboliiski and the Worker-Peasant Unity.
Todor Sabev – The Bulgarian Orthodox Church and the Jewish Question during the Second World War.
Contributors