The Pautalia Roman Baths are one of the most significant monuments remaining from Roman times in Bulgaria. They are second in size only to those of ancient Odessos in present day Varna. The building was a public bath built in the 2nd century as part of a larger complex used as a healing center called an asklepeion. An inscription recently found east of the site places construction of the complex during the reign of Emperor Antoninus Pius (138-161).

The asklepeion complex covered an area of about 3000 square meters, included six buildings supplied with a hypocaust internal heating system measuring about 1000 square meters. The vaulted corridor design is the only one of its kind known in Bulgaria. Of the bath chambers typically included in a Roman complex, the apoditerium, frigidarium and tepidarium have been positively identified among the ruins.

The Pautalia baths played an important role in Roman urban life. The buildings fronted on one of the main streets of the Roman town, the decumanus maximus. Their large size, architectural design, and rich interior indicate that they hosted much of the daily life of the community. This was a place where people not only bathed, but gathered for all kinds of social interaction, including music, literature, education and sports.

Images of the asklepeion complex at Pautalia appeared on Roman coins minted during the Severan era (end of 2nd to beginning of 3rd centuries C.E.).

The baths have been designated a cultural monument of national significance. 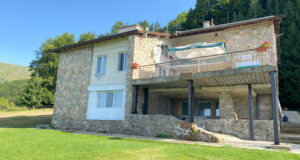