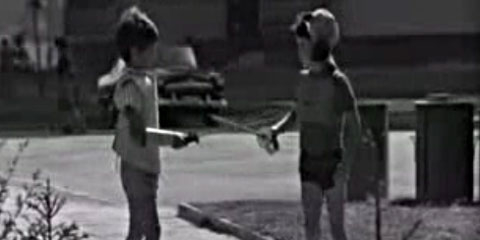 “Knight Without Armor” (BG: Рицар без Броня) is a splendid film for viewers of all ages which highlights the artistic achievements of Bulgarian film in the 1960’s. Particularly in the realm of story, Valeri Petrov’s screenplay masterfully reveals the world of little Vanyo, which often collides with the world of grownups.

Authors often use the gray realities of the day as a backdrop against which to search the depths of the human soul. Heroes often shine in contrast to their surroundings. So it is that through the mundane activities of this charming child and his family, we discover the tensions and contradictions of modern life.

Nine year old Vanyo is a typical boy, playing all day with a wooden sword, imagining himself a hero. He also notices when his parents say one thing but do another, and comes to realize that the adult world operates far removed from the chivalry of his imagination. He is sad and misunderstood by his elders.

The only one who pays attention to Vanyo is his Uncle Georgi. Around him the boy is happy, because not only does his uncle understand him, but he shares his interests as well, paying close attention to Vanyo’s every thought and desire. This helps Vanyo feel equal to grownups. The simple gift from Georgi of a small lump of crystal is precious for what it represents as a symbol of comraderie and acceptance. This pleasant male friendship gives him confidence that even without armor he can stand up to the rudeness and egotism of the rest of the grownups.

The great discovery in this film is the young actor Oleg Kovachev. His innocence, screen presence, and extraordinary artistry under the masterful direction of Borislav Sharaliev transform Oleg into a child wonder of Bulgarian cinema. After this he appears in leading child roles in many famous Bulgarian films, including Valo Radev’s “The Longest Night.”

The actress Maria Rusalieva, who plays Vanyo’s mother Amelia, shared that even now, this remains one of her favorite roles in film. For her, it was an exceptional opportunity to work with such greats as Valeri Petrov and Borislav Sharaliev and the unforgettable Bulgarian actor Apostol Karamitev. In her opinion, everyone on the set worked with great affection, creative enthusiasm, and unflagging energy to achieve a truly great work of art.

The title of the film is an often used phrase perhaps best known from the 1937 British movie of the same name and to Paladin, the hero of the 1950’s American TV western, “Have Gun Will Travel.” Both stories revolve around unlikely men who rise to heroic heights. It is no surprise to see that archetype used here in the context of childhood. 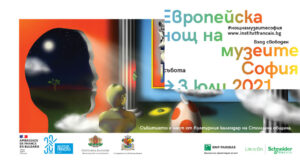